Training To Overcome The Fear of Sketching Out in The Wilds

The idea of stepping out into the world where anyone might want to take a peek at the pages in our sketchbook can be daunting. Especially if we're new to the idea or at the beginning of developing our skills. Of course, this make an adventure like An Imaginary Trip Made Real To England seem huge, but it's not!

It boils down to performance anxiety. We're afraid of disappointing ourselves and others. What would we do if we went and then couldn't get anything worthwhile down on the page? Eeeek!

Let me ask this: if you were doing a speech in front of 150 people, would you wing it or would you write and practice your speech for days, if not weeks, in advance? If you decided to run a 5K race, would you wait until the day of the race to start building your endurance? Of course not!

My friends, sketching is no different! It takes practice, a willingness to leave our comfort zones and a sense of adventure.

To begin conditioning yourself means starting to sketch NOW. Today.


And that's where things like a-n-t-i-c-i-p-a-t-i-o-n pages come into play. For me, anticipation pages began as a way to practice and psyche myself up for the "big event." Eventually, I realized that I kept creating them because they gave me a great deal of enjoyment. I like the build up of excitement before the actual trip. 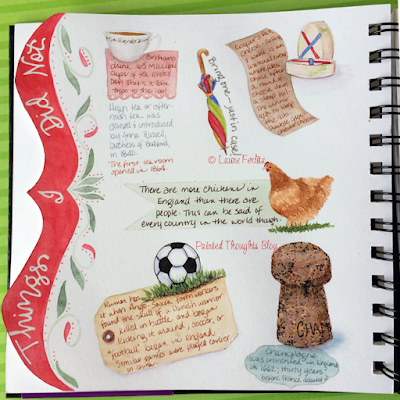 By doing anticipation pages, I "knock the rust off" of my skills if I've been lazy about sketching on a regular basis. When I create pages in my home environment, I try to work from life, but sometimes that's not possible. Since I don't have any chickens, I went to the computer for inspiration. I worked from the screen rather than printing out a photo. Same goes for the soccer ball.

I had a champagne cork so I used that as my model, but I didn't have any cheese rolls lying around, so it was back to the computer. This time, I found out what cheese rolls looked like and then drew them in the composition I wanted for my page. The umbrella and tea cup were my own and I drew from life to strengthen my eye and hand coordination.

Taking It To The Next Step
While you're definitely in training when you're sitting in your kitchen sketching away, working outside of our normal work area, is an entirely different experience and one that should be practiced as well.

When I first decided to sketch on location, I waltzed out the door and went to a town about twenty minutes from me. The downtown area was full of interesting old buildings and mostly deserted on a Sunday morning. I was making sure there was no one about, but it didn't matter, I still failed spectacularly! I had not yet discovered a new mindset.

Since working on location totally blew my mind, I decided to begin again with baby steps—I started in my kitchen. I would pull a chair away from the table and draw something with my sketchbook in my lap. I sketched and painted whatever was outside the window or I'd set a leaf or pot of flowers on the window sill and draw.

After a while, I became bored with this set up and went outside and drew in my backyard. My backyard's not all that exciting so it didn't take too terribly long before I decided to go to the park and sketch. Sure, I chose an area where I wasn't likely to run into anybody, but I was still getting out there. I eventually went into town to sketch and then a restaurant and so on until I conditioned myself to sketch anywhere. Not all sketches were successful, but the training was! 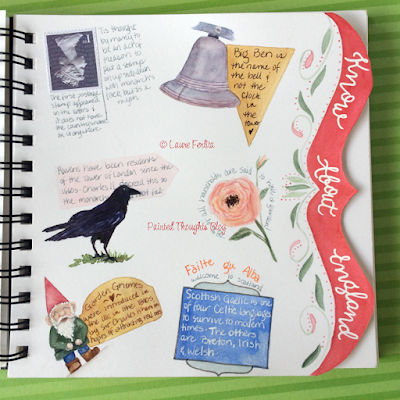 I would occasionally gather up my courage and go sketching around a bunch of people in a busy location. Sometimes it worked out and other times it looked like a rabid squirrel had scribbled all over the page. My nerves would get the best of me and I'd panic.

But you know, I survived. And with each attempt I became a little stronger, a little gutsier. I also realized that most people have no clue what I'm doing. They don't notice. They're too busy with their own dramas to be worried about me and my little sketchbook.

There's also something about interacting with people, by choice, that lends another layer of patina over the whole experience. Most folks that stop and talk to you, who want to see what your doing, want to be like you. They want to be brave enough to sketch "out in the wilds." They want to be creative. Just listen to them. You'll hear it in their voices when they speak.

Changing Your Mindset
When sketching in the wilds, it requires a different mindset than sketching in familiar [safe] surroundings. First and most obvious, is the amount of time we'll have. When we work in our homes, we can work as long as we want [in comfort] on something, usually while working from a photo.

When we're on location, we have a much more limited amount of time and we must adjust our expectations to match the amount of time we have as well as the current skill level we possess.

Rather than viewing the time limit as a bad thing, use it to challenge yourself to see just how much you can get done on location. If you're not getting much down on the page, start looking for ways to work quicker. This usually means leaving out details or suggesting them rather than meticulously recreating them.

Another big change to consider is this: if you don't get finished on location, you can always take a quick snap with your phone and use it for reference later. Knowing you can take a photo helps to reduce the amount of pressure we place on ourselves to get the page finished in one sitting. Sure, that's the long term goal, but we're in training and that goal will be met eventually.

Last, it's a sketch. It's not a mini-masterpiece! When we're on location, dealing with the elements, the light changing, people walking around and other distractions, sketching becomes a mini-adventure within the bigger trip! It takes on a life of its own that becomes an indelible memory that queues up every time you look back at your sketch. And I will share a secret with you...even lousy sketches still serve as a great portal back to the moment in time where it was created!

So instead of postponing a marvelous adventure like An Imaginary Trip Made Real To England until "you're ready," go ahead and sign up today! Then start training for an adventure unlike any other. Challenge yourself to sketch something each and every day. Even if it's for just 15 minutes a day, you'll have logged over 30 hours of practice before we leave for England!!

And remember, once we're in England, you'll be with likeminded people and I'll be there by your side to help you create a sketchbook full of great memories!

How do you prepare for a big art trip? Any "training tips" you'd like to share that help you move past fear?
Posted by Laure Ferlita at 10:03 AM 13 comments:

I have not posted on this blog for a while. As I wrote my own blog yesterday about my recent family reunion I remembered my family history project from some time ago, which was mentioned in the Artist's Journal Workshop book. It was a different side of the family (paternal) , and I realised that I have very little from this side of the family (maternal) in the way of objects, letters and photos .
I was fortunate to capture what I could at the family reunion.

Last weekend I spent five days interstate for a Family Reunion in Goondiwindi  (pronounced Gunda - windy) in Queensland, Australia. pop 5600. I completed over 10 pages of sketches.

my maternal line . drawn from family photographs. I drew this in advance to set the scene and begin the narrative of the following pages.  Faber Castell Dark Sepia watercolour pencil is perfect. I was tempted to use colours with the current generation, but liked the old world look.

It was a gathering of over 130 descendants of two migrants in 1850's. Our family line stayed in the area until 1953, so there is close connection.
This is my art blog so it is all about the sketches from the weekend. It also includes sketches done in advance and completed afterwards.
I took my customised  watercolour pencil wrap and Moleskine watercolour sketchbook (13 x 19 cm) with me, as I do everywhere I go. There is always an opportunity to sketch ! 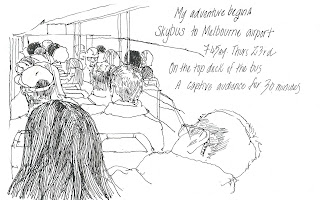 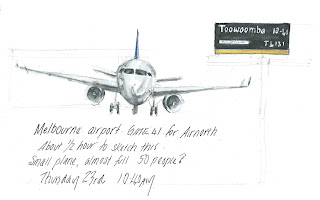 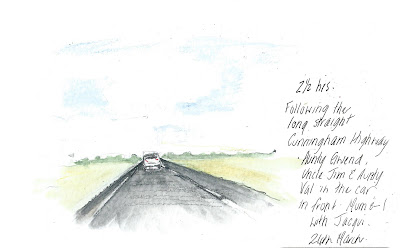 But first I had to get there - My journey began with a bus ride a,  two hour flight then a two and a half hour drive west to outback Queensland.
The Cunningham Highway is a long flat road. Not as brown and barren as I thought it would be. 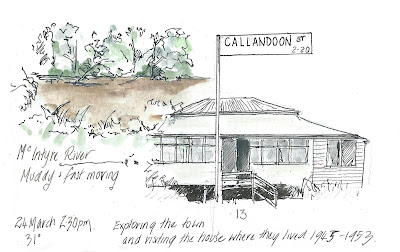 Some time was spent visiting places which brought back  memories for some of the family. 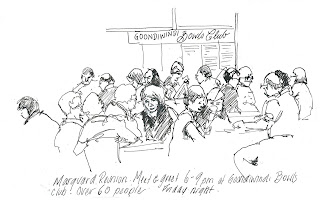 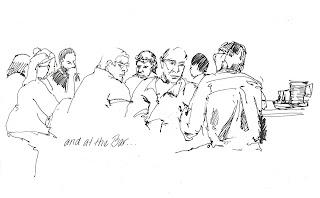 Meet and Greet at the Goondiwindi Bowls Club on Friday night. So many new faces. 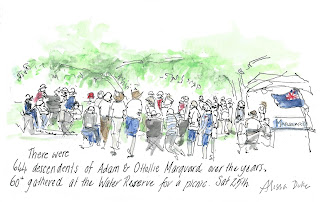 I sketched this in the open hot, dry heat of 33 degrees. I did not stay out there long, heading back under the trees for conversation and food. 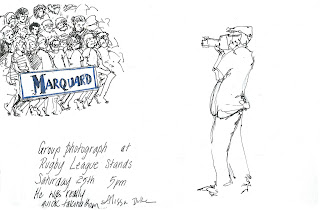 Group photos at Goondiwindi Boars Rugby League Playing Fields - one of everyone and then the separate families. The photographer was really quick and did not stand still for long. 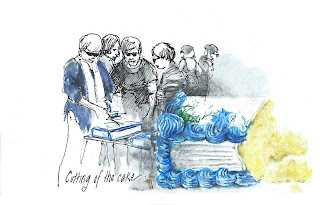 Lots of social gatherings .  But I did not sketch at them all, as I wanted to socialise, ask lots of questions and try and soak it all in. The long weekend was very well organised, with names on coloured tags for which line of the family you are descended from. Great introduction and talking points. I met some lovely and interesting people. 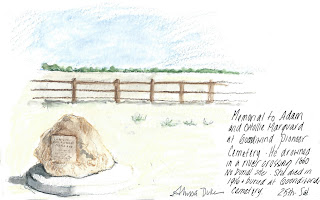 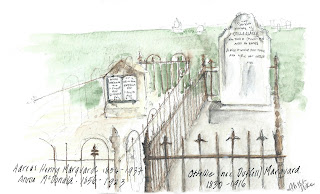 It was a very special moment to stand in front of the graves of the ancestors who began life here in a strange foreign land over 150 years ago. It is difficult to try to understand the difficulties and challenges that they encountered. 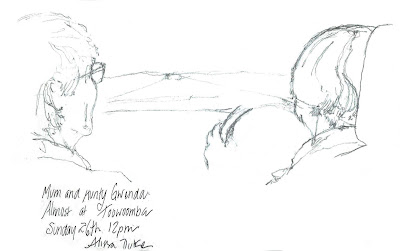 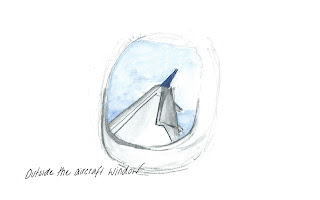 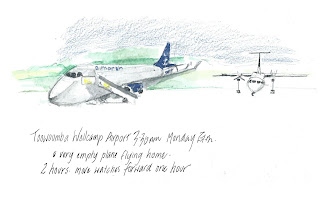 and then the return journey home.....
... to start writing down some of the family stories that we were told and fill in the gaps on our family tree with the new relations we discovered.
Below is part of that history - Nana's tennis trophy from 1941. The town of Toobeah now has a population of 42. I think it was about 250 when she visited, There are quite a few tennis courts around the district, and it must have played a big role in the social life of the district. 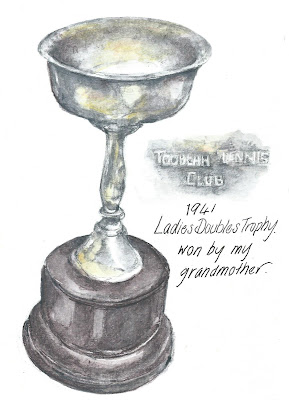