Our family looks forward to going to the county fair every year.  It makes it that much sweeter when we're able to have little ones along with us.  This year we had three little girls and the one I sketched in my journal, Adelaide, was so thrilled to be able to go into the stall with the palomino pony.  Her face just glowed! 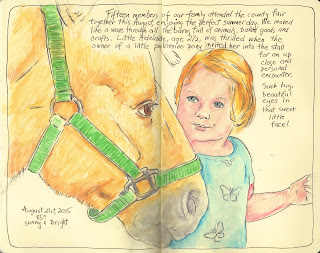 Posted by Sandy in Michigan at 3:32 PM No comments: 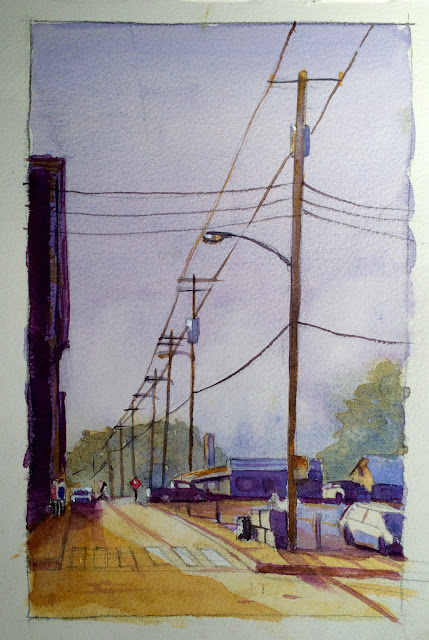 Morning at the Lake 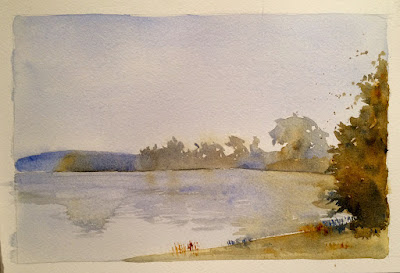 I painted this sketch in my handmade sketchbook containing my favorite watercolor paper, Strathmore Gemini 140-lb CP.  It has the right amount of sizing that works for my style.

More info about my handmade sketchbook.

Posted by Steve Penberthy at 6:00 AM 5 comments:

why drawing makes me happy

Drawing makes me happy
I have been thinking about why drawing makes me happy, without getting too philosophical, and I have tried to put it in words. This proved more difficult than I thought, so this is a longer blogpost than I imagined. I originally posted this on my own blogpost. I received the most feedback I have ever had on my blogpost from fellow sketchers that I thought that is might resonate with people who use their sketchbook as an artists journal.

I have been drawing on and off (mainly off) all of my life. About ten years ago I started drawing almost daily, then I began carrying a Moleskine watercolour sketchbook, my Watercolour pencils and Lamy Safari Joy ink pen with me everywhere. Now, drawing is a part of me and my life. It is not a hobby or pastime, but part of what makes me – me. This realisation came when I was very ill about four years ago and had (successful) brain surgery. I was asking for my pencils and sketchbook in intensive care a few days after the operation and then sketched constantly in hospital over the following months. See all my drawings from my medical adventure here

Now, I draw everyday, a quick sketch capturing a passing moment or a longer drawing over a few days or nights. If I don’t put pencil to paper for a few days I get itching for it - looking at people or scenes and visualising how I would capture it on paper – what would I include, what features to emphasize or which colours I would choose.
When I draw I am happy. I switch off from everything else in life, time stops, peacefulness reigns, there is freedom and fluidity. I try and draw in my lunchtime at work. When I make that time, I sit in the library shelves where I work and draw the books. For that half an hour, although I am at work, I do not think about deadlines, goals or things to do lists.

I read a quote from happiness guru Csíkszentmihályi describing this as FLOW, which is "being completely involved in an activity for its own sake. The ego falls away. Time flies. Every action, movement, and thought follows inevitably from the previous one… Your whole being is involved, and you're using your skills to the utmost.”
It has taken years to find my own drawing style and become comfortable with it (although I am still learning constantly). I feel as though I have finally found something that I am good at. I have accumulated skills and learning through years of practice. Sometimes my pencil moves confidently and smoothly over the page, other times tentative and exploratory. But I am always enjoying it as I work and explore within my comfort zone on the paper.
As I draw I am subconsciously thinking about the drawing, its proportions, what colours will work on the page. I am visualising how something may turn out. However, they are not thoughts I have to think too hard about – ah well, except proportions and perspective – that requires a bit more thought. The finished result may meet my original idea, or may not, but still exceed my expectations. In photos of me drawing, you would not think I am happy – hunched over, furrowed brow, intense expression- but honesty I am!!

There have been a few times when I have become very emotional and almost bought to tears at the thought of how much joy I experience and how fortunate I am to be able to draw. They were moments of an unexpected upswelling of joy. Below is one of those times. I was sketching on my own in the streets of Barcelona, after the Urban Sketching Symposium in 2013 on a Sunday morning, surrounded by the everyday happenings of peoples lives.

Barcelona July 2013 after the Urban Sketchers Symposium. Sketching on my own

There is so much more to write about drawing and happiness . Especially the concept that when drawing you are not only looking but observing what you see everyday as you never have before . But this is the subject of another blog another day…
I shall finish on David Hockney quoting an old Chinese saying “Drawing needs three things, the heart, the hand and the eye, two won’t do.”
Posted by alissaduke at 10:03 PM No comments:

Email ThisBlogThis!Share to TwitterShare to FacebookShare to Pinterest
Labels: dealing with emotion, drawing

August Is Artist Appreciation Month - Come And Join Us!

I was recently made aware that August is Artist Appreciation Month. The idea is basically to discuss/share about an artist who inspired you in your creative journey. It can be someone famous, someone local, a friend or a family member.

Have you heard of it? No? Me either.

After doing a little research, I found that the idea had been around for a few years but had not really taken off. Still, the idea has merit and felt like something worthwhile, so I've written my story below.

I think in this sharing we'll find we have things in common we would never have guessed and I also think there will be quite a few surprises. I hope you'll join me in sharing your story!

When I looked back at my own journey, I realized my catalyst to undertake an artistic life began with a visit to a craft fair when I was either 15 or 16 years old. Mind you, my sole reason for attending the event was because my mother told me I could drive if I went and since that was uppermost on mind in those days, you can bet I went! I liked crafts as well as the next female, but I mainly went because I was able to drive. (The priorities of a teenager!)

After arriving at the event, I quickly became bored and wandered off by myself rather than trailing around behind my mother. (Teenage angst showing.) In my wanderings, I came across an artist painting a macaw parrot with watercolors. The parrot was mostly finished as I recall, but what held me spellbound was watching her use green paint to "carve" a leaf out of a white background.

The artist was quite skilled at creating form and shape in one wash. (I learned this much later.) As I watched, she added lights and darks, lifted a bit of paint and suddenly, it looked like I could have reached over and picked that leaf up. It seemed so effortless!

I was instantly, completely captivated, a willing hostage to the magic she was creating.

After watching for several minutes, she engaged me in conversation and explained a little about what she was doing. I have no idea what paints she was using, what her palette looked like, how many pigments were on the palette, the type of brushes she used, the type of paper she was using or whether she had two buckets of water or just one.

All I knew was that I had been witness to something incredible and I wanted to create magic too!

She told me about some classes on the other side of town from me, but I was never able to locate them. I searched for again after I moved to that area, but I had no luck in finding her. I'm sad to say I had no clue what her name was nor did I ever locate her.

I wish I could.

When I walked out of that craft fair, I knew with unshakeable conviction that one day I'd be able to paint with watercolors. I can still see that leaf coming to life before my eyes when I look back at that memory over 30 years later!

The artist engaged me with her humor and willingness to share. She encouraged me to pursue my interest by telling me about the classes. But maybe best of all, she made it seem possible that I too could one day create art.

There were no discussions about how hard watercolor is to learn or how long it takes or anything negative. She didn't put up any obstacles nor did she set herself on a pedestal to be admired by the little people. Instead, she showed me her joy in a simple pleasure.

It took another decade and a few more cataclysmic events before I became serious about the pursuit of my art. I'd always dabbled in crafts, but I believe the idea that I could actually making a living with art, be an artist (gasp!), was planted that day.

There's plenty of negativity out on the web these days. The political arena is heating up with all kinds all balderdash, so how about joining me in sharing your story about an artist or artists that inspired you on your creative journey? If you do, please leave a link in the comments as I would love to read your inspiration. ~ Laure
Posted by Laure Ferlita at 9:05 AM 4 comments:

a small "just in case" sketchbook 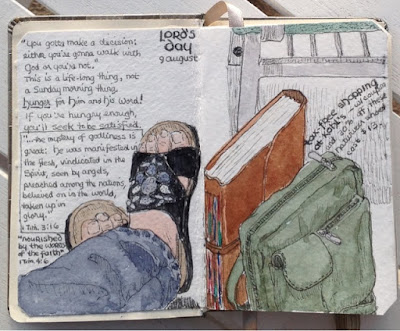 For the past three days Texas had "tax-free days" for back-to-school shopping. Since I had a money coupon and a 30% off at Kohl's, I bought these sandals from Naturalizer . . . only $13.40! Very comfortable. So I drew them before church with my large sketchbook and bag. 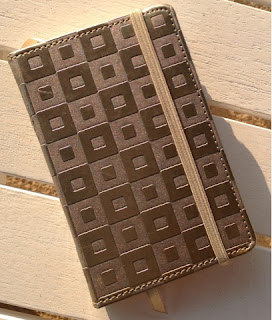 I took the large sketchbook to show the kids at church my recent dinosaur sketches, but I drew this in a tiny purse-sized sketchbook. The cover was from a used Moleskine-like book that a daughter-in-law gave me. I gutted it and refilled with small scraps of various watercolor and Bristol papers. The papers didn't quite fit heighth-wise and the gluing job wasn't very neatly lined up, but I like having a smaller "just in case" sketchbook in my bag. Especially since my new regular sketchbook is larger than the bag.
Posted by Vicky L. Williamson at 8:09 AM No comments: 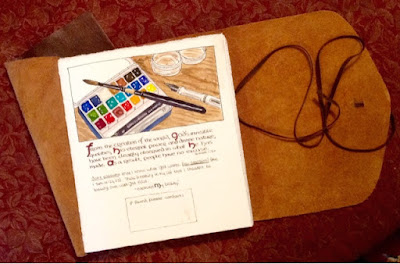 This art journal was bound last year using Kilimanjaro paper from Cheap Joe's and a scrap of leather from an upholstery shop --- they let me have the leather scrap free! It's soft and pliable, wrapping around the text block. This time, I sewed the paper signatures directly to the leather, one at a time, using hand-dyed silk threads. Which means the middle two-page spreads of each signature will have colorful silk thread running down the middle, but I like how the colored threads look on the outside spine. 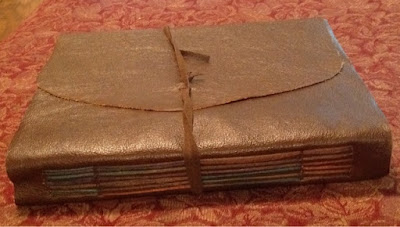