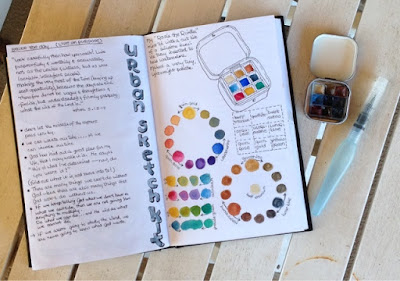 On our recent trip to Fredericksburg, I purchased a tiny mint tin because it reminded me of a friend and co-worker who portrayed Rosie the Riveter in historic presentations. Teresa's aunt had actually been a riveter during World War II, and much of the material was based on her memories. And now the tin has been turned into a wee paint box. I tested my color choices on this page. 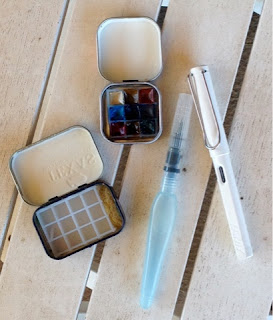 A silicon mini ice cube tray from Amazon was cut up to fit the tin with 9 spaces for tube paint to be squeezed into. While I was at it, I cut another to fit the Texas mint tin I purchased when we were planning to move to Texas. Formerly it held 6 half-pans of paint; now it can hold 12 colors plus a bit of a natural sponge. 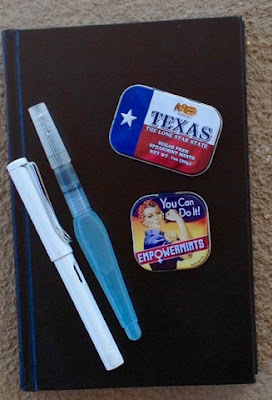 The bare minimum of tools to take along with me . . . one of these tiny tins, a fountain pen, a waterbrush, and my journal.
Posted by Vicky L. Williamson at 12:53 PM 4 comments:

Last weekend I spent a delightful weekend away in the delightful Port Fairy, four hours from Melbourne . I carry my Moleskine Watercolour sketchbook, Lamy Safari ink pen and watercolour pencils with me everywhere. This blog is my journal of sketches from the weekend. It includes my different styles of sketching and drawing, depending on time, opportunity and inclination. I feel like I have captured my weekend on paper and looking back at it will bring back memories of the time and place.

I caught the train to Warnambool and then a short connecting bus ride to Port Fairy. 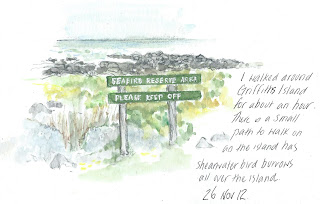 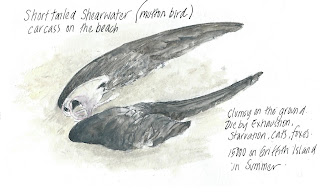 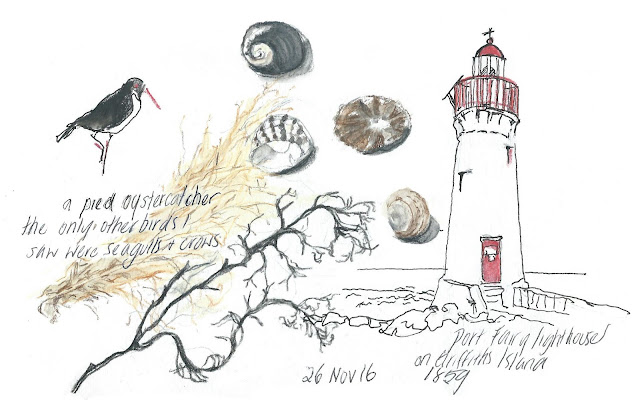 I walked around  the nearby Griffith Island. The lighthouse and bird (above) were sketched on location. The shells and seaweed drawn back at my cosy accommodation in the evening. It was an idyllic day.
The Port Fairy Lighthouse was built in 1859 (41 feet above high watermark) and is on Griffith Island. Griffiths Island is also home to a large colony of muttonbirds, who nest in burrows in the ground.
I saw the dead Muttonbird (Shearwater) on the beach at the end of my walk and sat on the beach to draw its angelic wings as it was buried in the sand. I had seen a few dead muttonbirds on the island (thousands roost live there in summer) but this is the first one I wanted to draw. 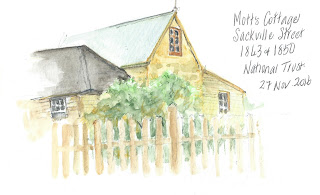 On Sunday I met with a sketching friend, Angela who took me on a tour of Port Fairy and we sketched some of the sights. It has so much to offer visually and historically. I am returning in February and will do more sketching then. 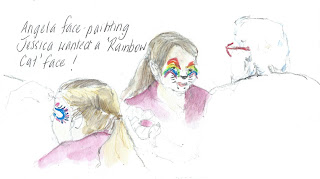 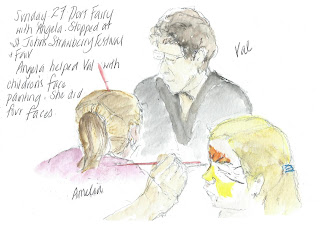 As well, as seeing the sights, we visited a local Church fair, where Angela's friend Val was face painting. A group of four small girls arrived with parents and Angela offered to lend a hand. It was an unexpected and delightful time of the day. The young girls were very happy with the results of the newbie face painter! I was happy to sketch the painters.
I am really pleased with my captures on paper from the weekend.
Posted by alissaduke at 6:43 PM 1 comment: