I heard about new sketchbook maker and all comments were quite good. The name kept popping up  and eventually I did a google search, found Stillman and Birn web-site and then found them on facebook too. I wrote and e-mail to the manufacturer trying to see if any local shops carry these books  and made a note to order one sooner or later online - but then received an e-mail that a wonderful gift is coming my way! It was Alpha Series sketchbook, hardbound, 5 1/2 x 8 1/2 - it became my sketchbook #59 and I spent about 6 weeks with it in my bag. Long story short - it's a great sketchbook to work with - my main adjustment would be the size - it seems that I enjoy larger books lately :)

Cover withstood some vigorous activities, was subjected to kids running over it (by accident), heavy and not so heavy rain, kitchen table and sandbox adventures, sticker attack, not to mention normal wear and tear and now that I am about to deposit it on the shelve - it looks great - not a scratch.

Paper worked very well with dry - and water media - I worked with watercolors, acrylics, multiple inks and gouache and in all cases buckling was well within expected amount for this weight of the paper (100 lb).  I used markers, all kinds of pens, some collage as well. Paper was reasonably responsive to lifting and multiple applications though in some cases uneven in the way pigment settled in: I would do a single brushstroke wash, try to lift something and see that part of the edge is still editable where another part is not. It adds some personality to the page and can be incorporated nicely - you just need to be ready sometimes.

My problems were surprising: waterproof inks (and permanent watercolors for that matter) were not exactly waterproof unless I waited for ink to settle for a long time. And during first 1-1.5 minutes even the most waterproof and smudge-proof ink was smudging badly. It happened with Uniball pens, Pentel Pocket Brush pen, dip pen with Noodlers ink, pitt pens and brush-pens - the only pen that was working without a glitch was the cheap ballpoint I love so much :) So - some smudging and some not-so-waterproof adjustment was needed - and for someone drawing quickly it took me some time - but I had a lot of fun in the process: 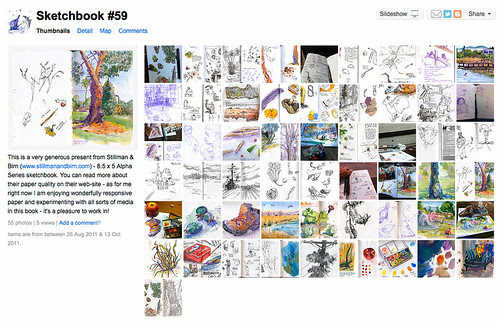 (these are obviously not all 124 pages I filled - lots of private notes and experiments took place there - but you still can see some results ;)
Posted by Nina Khashchina aka Apple-Pine at 1:08 AM