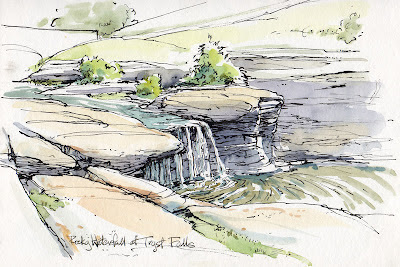 OK, I've got one, really, but BESIDES my husband, I am really enjoying playing with my Hero pens...

Like the Duke that Laure Ferlita featured in this video, the Sailor pen mentioned in this post,
and a number of others, the Hero calligraphy pens are Japanese (oops, I meant Chinese, I knew that!  Duh...), and have a different configuration than Western calligraphy pens.  They have a bent nib that makes a wonderfully brush-like mark, depending on the angle you hold the pen... 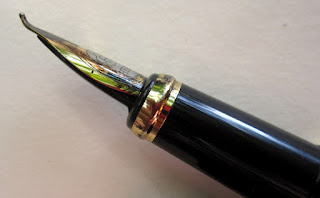 They also range from very inexpensive to rather more...I've bought a couple of Hero pens on eBay for under $10.  It's the luck of the draw on really inexpensive pens, but they ARE fun to play with!  I'm looking forward to getting a bent-nib pen of somewhat better quality, though I don't think I'll be getting one from a Living National Treasure like the Sailor pen described here: http://www.sailorpen.com/nagahara-story.html

Fountain pens aren't for everyone, of course...they require a bit more care than disposable pens, but you can keep them for years, and enjoy a long relationship.  You can use colored inks, too...I like the versatility as well as the long-lived aspect.
Posted by Kate (Cathy Johnson) at 2:02 PM