I first "met" Laure Ferlita online...no big shock there...and the better I know her the more impressed I am at her creativity, drive, organization, talent and helpfulness! If you've taken one of her classes, you're lucky enough to know her even better.


Laure is an accomplished watercolorist living in sunny Florida with her best friend and husband, Chris, as well as a host of critters. She fell under the spell of painting watercolors at the age of 15, as she watched a woman painting a Macaw parrot at an art show. However, it was to be years before Laure actually started to paint.

After a lengthy recovery from a car accident in her mid-20s, Laure decided to go in Graphic Design. As computers had not yet revolutionized the industry, Laure went to a trade school to learn to use an old-fashioned t-square, paste-up board, ruby acetate and a wax machine. (For those unfamiliar with those items, please use Google!) 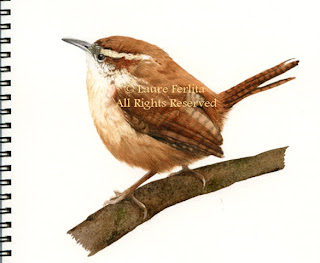 Fast forward through 20+ years of design work for Fortune 500 companies to late 2007, when Laure learned her job was being outsourced. The opportunity to make a break from the bleak, gray cubicle walls presented itself 2 years earlier than she'd planned. Since Laure had been scheming and dreaming of an escape from Corporate America at the end of 2009 anyway, there was little doubt she was on her way out the door to another chance at an artistic life.

After some time off and the chance to get a read on her internal compass, Laure found herself with an unusual idea—the possibility to paint virtual locations without having to travel! After numerous conversations with artists, computer geeks, and friends, Laure decided to make a go of it. Loving travel, watercolors and journals, she couldn't think of anything much better than a life that combined the three and shortly afterwards, ImaginaryTrips.com was born.

Imaginary Trips has met with uncommon success and continues to grow in leaps and bounds with trips and visits to more than a dozen different locations as well as the Artful Journaling series that helps artists get started with watercolor journaling. Now, 18 months later, the sibling company, ImaginaryTripsMadeReal.com has just launched with an inaugural trip to New Orleans in November 2011. These adventurous trips are designed to allow the artist to take their newly honed skills to actually paint live in the locations originally painted virtually.
So let's get right on to the interview!

Q - How long have you kept a journal, and why did you start?

A - Well, I've kept a written journal seen my late teens. It wasn't until about 5 years ago, when I saw some beautiful journal pages that incorporated both art and the written page, that I realized I was missing out on some fun! After just a few tries at combining art with my written thoughts, I was hooked!


Q - You’re a wonderful watercolorist—did the journal come first, or after?

A - I've been painting for 20 years. Journaling was a tough nut for me to crack....I have purchased dozens of beautiful journals throughout the years, each time thinking "This is the one! I'm going to fill this one!" However, those beautiful, pristine pages held me captive for the longest time. As a recovering perfectionist, I just knew I would mess them up! It wasn't until I made my own journals and started filling them, that I moved past the paralysis of the white page.

Q - How did you come up with the idea of imaginary trip journals?  (I’m using a bit in this chapter, which includes travel journals, and mentioning your classes.)

A - Imaginary Trips came about because of conversation with a cyber friend. This friend asked me if I taught and I replied "no, not yet." She next told me she would soon be moving to Europe, and if I was interested, she would host me! I decided I needed to get busy with the teaching, except I couldn't find any local venues for my classes. So I decided to go virtual. After running the idea by several artists, friends, and a couple of computer geeks, Imaginary Trips was created!

Q - How long have you been offering them?

A - Imaginary Trips has been offering classes since September 2009. There is a full lineup of classes for the next six months now at ImaginaryTrips.com, with a few more still to come. A quick Christmas in July starts on July 7th and then in August, we're going to Italy, then Paris and the NOLA!

Q - Do you do much actual travel?

A - I used to have travel quite often when I worked in Corporate America. Most of 2009 and 2010 have been dedicated to getting Imaginary Trips up and running.


I will be getting in more travel now as I have just launched a new venture, Imaginary Trips Made Real! This new company gives artists the chance to paint on live location using the skills acquired in the online classes.

Once again, the new company has been met with great enthusiasm. The inaugural trip to New Orleans in November 2011 only has two spaces left! I am so excited to begin traveling again and in the company of other artists! If anyone is interested in more information on the trip, they can visit www.ImaginaryTripsMadeReal.com.

Q - How do you choose what art supplies to suggest? As if people were actually traveling?  What do you tell them to get?

A - When I first started to learn to sketch on location, I would haul half the studio with me (whether I was going to my own backyard, the beach, the mountains or another country)! I quickly learned that less really is more—all that stuff gets h-e-a-v-y! I also began to realize it seemed to come down to a few choice tools I used over and over. I didn't need the vast majority of the stuff I was dragging around! One of the things that helped greatly with this was realizing that I was going to sketch, or to capture the essence of a place rather than a finished painting created on location. By identifying the activity as sketching or plein-air painting, I could then  sort out the equipment I needed for my adventure.

For someone new to sketching, I suggest using the same sketching tools over and over again whether they're going to the backyard, around the block or to the other side of the world—a basic palette, journal and a few well chosen tools like a waterbrush, mechanical pencil, white eraser, etc., permanent black pen and a white gel ink pen. Learn the capabilities of those tools by pushing them to see what they can and cannot do. Test each item thoroughly to see if it has enough value to stay in the kit. If you don't use a tool, why haul it around with you?

As I've identified things that I needed on location, I've added in those items. An example of this is a clear wax crayon to use as a resist. It's great for saving highlights and simple shapes like clouds. This saved me from trying to mask, reclaim or lift the highlights through scrubbing or scratching! Keeping your equipment to a minimum and knowing your tools intimately is one key to being successful sketching on location—whether it's virtual or in the real world!


And a personal note to me from Laure, which I'm including because she appreciates our fellow journal keepers:


Kate, I would like to take a moment and say thanks to you for this fantastic book and the opportunity to help people realize the fun there is in journaling, whether on location or at the kitchen table. I am so very proud to part of this book as well as humbled to be in the company of so many fabulous artists!  I know you feel strongly about journaling. In the last five years, I've come to share those feelings as well. I simply can't imagine not keeping a journal. Again, thanks for including me and a tip of the hat to you for creating such a FANTASTIC book, the group blog, Facebook group and resources to help any artist get started or re-engaged with journaling!

Thanks much, Laure, it's my pleasure, and I'm delighted to share you and your work with everyone!


Or her wonderful classes! http://www.imaginarytrips.com/ImaginaryTrips/Welcome.html
Posted by Kate (Cathy Johnson) at 2:05 PM